After the success of the past couple years, and the overwhelming number of applications we received from comedians, we are delighted to be producing the Union Jack Radio’s Circuit Breakers project again for Leicester Comedy Festival 2020! Our crowd funding campaign raised over £1,000 from public donations to help enable us to continue to support new and emerging acts who otherwise wouldn’t be able to come to the festival. Union Jack Radio have been confirmed as a sponsor of the project, so it will now be known as Union Jack Radio’s Circuit Breakers. With their added support we’ve been able to extend the offering for the new & emerging comedians. We are currently in talks and hoping to extend to shows in London along with the Leicester shows in February.

As a registered charity, we need your help to do this so thank you for all your support!

You can catch them at The Bill Murray in London on Wednesday 18th March for their final CB showcase hosted by Mark Dolan, tickets are available here.

After 6 weeks of the crowdfunding campaign, we are very proud to have raised more than £2000 to set up the project again.

The comedians who took part in Circuit Breakers 2019 were: 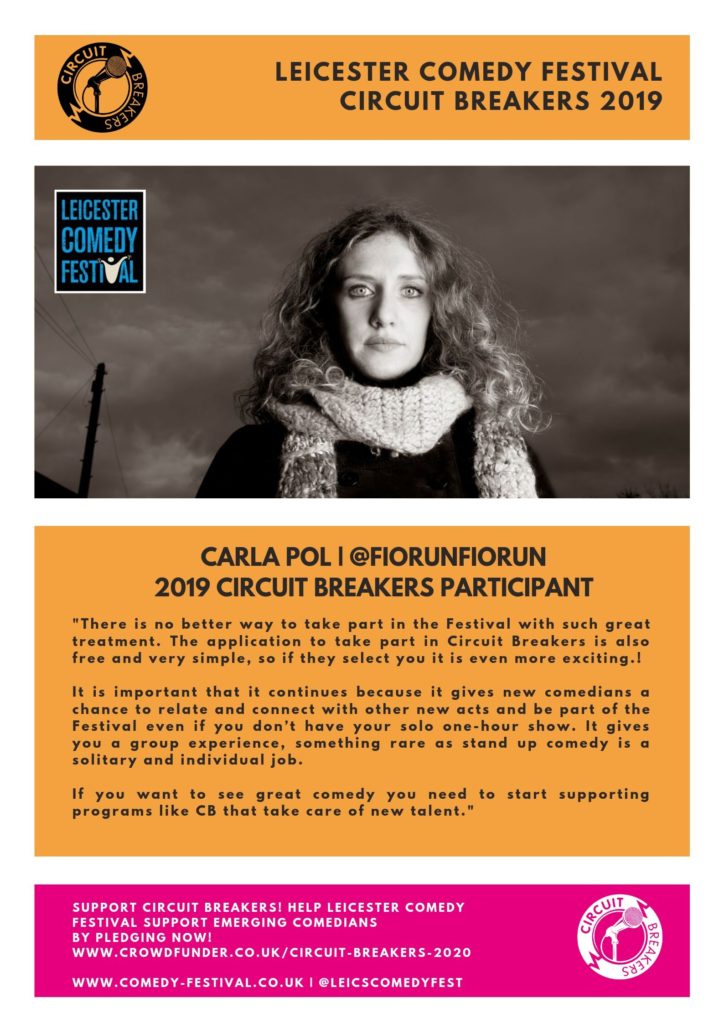 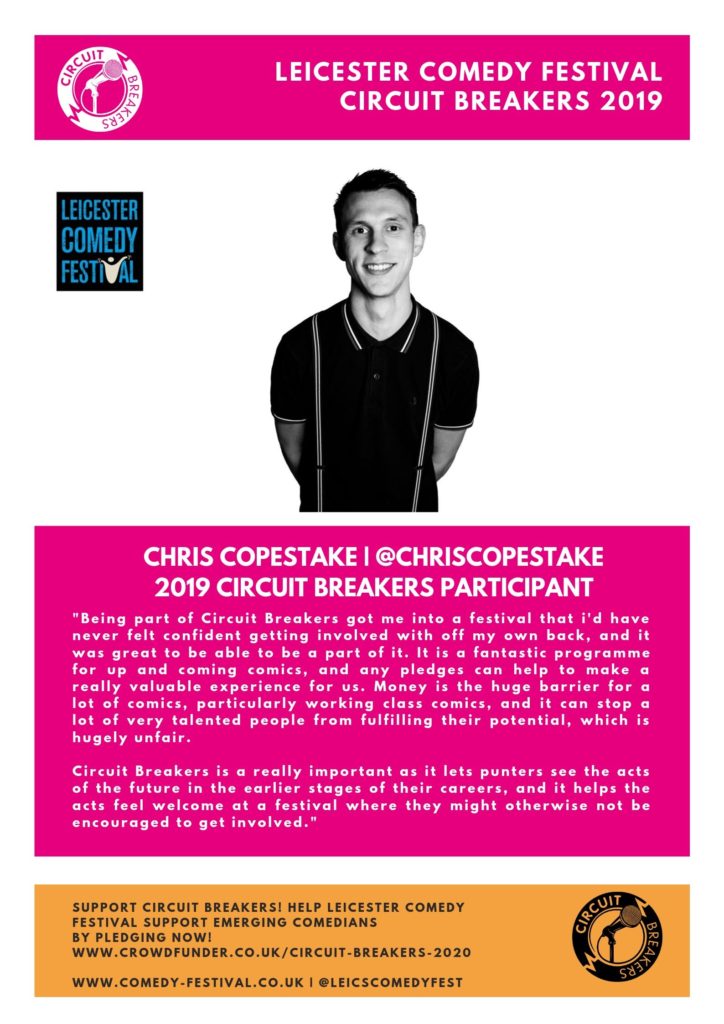 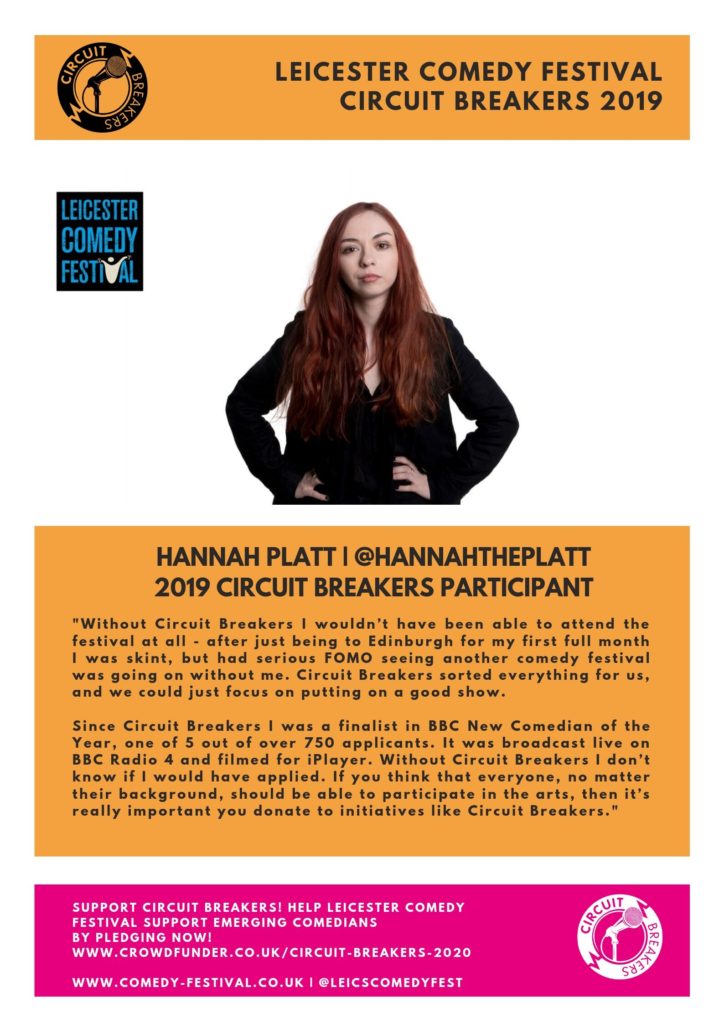 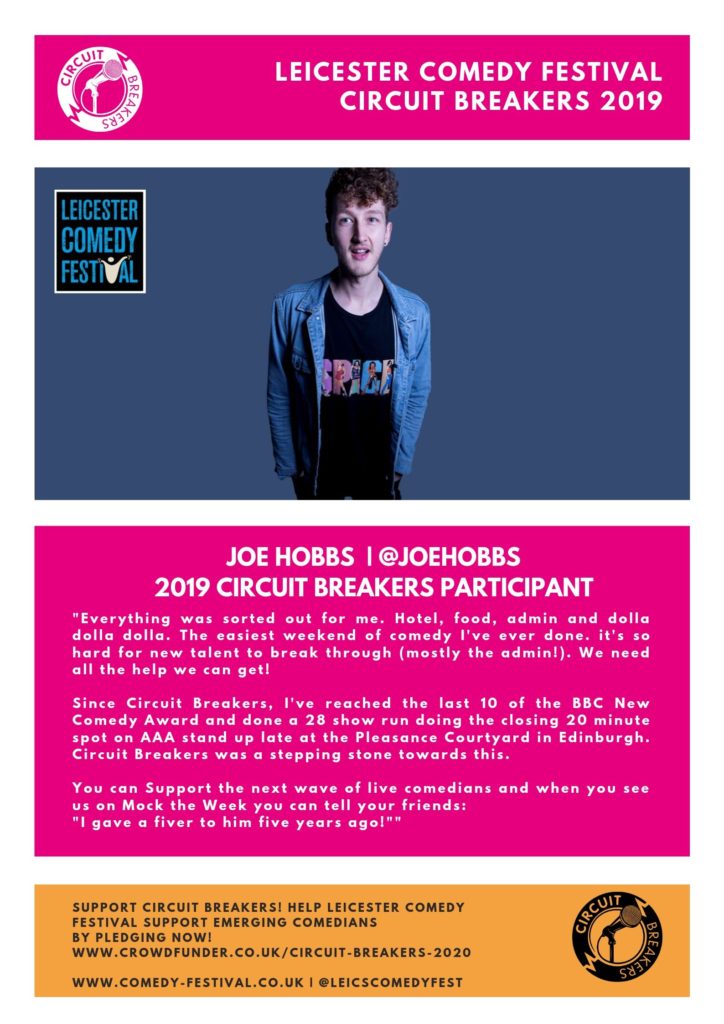 The comedians who took part in Circuit Breakers 2018 were:

They performed brilliantly for 2 nights, in front of a full house, with the support of the great host Mark Dolan. In addition to their gigs, they had a network lunch, a photoshoot with renowned photographer Andy Hollingworth , and were able to attend other gigs and parties in the Festival. “We were made to feel so welcome and supported throughout the process and everything was so well organised and enjoyable.” Regan MacNeil

“Circuit Breakers gave me a fantastic taster of what a career in comedy will be like. It gave me more confidence in my material, and myself as a comedian. Since Circuit Breakers, I have been able to push myself comedy wise as well as networking, which has led to me MC’ing for the first time, and performing at Edinburgh Fringe 2018.” Liam Bannigan

Over recent years the programme of shows at Leicester Comedy Festival has echoed the Edinburgh Fringe model of people doing full shows, mostly around an hour long.  There are some mixed bill shows but these tend to feature comedians who are reasonably established.

We know there is an audience who want to seek out the newer acts during the festival and we also know there are plenty of acts from across the UK who want to come to Leicester but they are new and don’t have hour long shows.  Circuit Breakers will benefit comedians like this; the ones who are about to break on the comedy circuit.

“I did my first ever hour long show at the festival and had a lovely time.  I use the festival as an opportunity to do work in progress shows, as a stepping stone to the Edinburgh Fringe or touring shows.” Sarah Millican

We know that comedians massively benefit from performing at Leicester Comedy Festival.  They receive good publicity, can get reviews for their shows, increase their social media following, have the potential to get “spotted” by the industry and also maybe win an award or two…

Circuit Breakers is different as this project is to support those acts who don’t have a full show to bring to the festival.  We know there is a lack of showcase shows at Leicester Comedy Festival and we often have to turn acts away if they don’t have full shows.  So, we’ve put together this package to support new & emerging acts each year.  They will get support to come to the festival, plus professional support from the festival team, as well as paid gigs during the 19 days.

The Circuit Breakers Project: How it started

One of Leicester Comedy Festival’s key aims from the very beginning was to provide a platform for new & emerging comedians.  We have done this over the years and now, in our 25th year, we want to encourage acts who don’t have full shows to come to the festival and provide them with professional support at the start of their careers.  Circuit Breakers will provide a supportive place for new and emerging acts to perform and develop their networks and contacts.  We think this is a new & different approach as it is for comedians who are at the very start of their careers.

“I have a long standing relationship with Leicester Comedy Festival.  I did the Leicester Mercury Comedian of the Year competition in 1997 and I won.  It was brilliant.  It was the first thing I had to attach to my name.  I’ve been back since. It’s been here for years; it’s such a long standing festival.  There is a brilliant comedy audience at the festival; they want to come and appreciate great comedy.”  Johnny Vegas

We know the festival is a great platform for emerging comedians and we want to continue this to provide this. Sponsors and funds are increasingly difficult for us to sustain but we want to continue our commitment to support new talent.  Recent feedback from our audience has shown that a significant number massively value this part of the festival and want to support new talent themselves.  Hundreds of comedians attend the festival each year but we want to specifically support those who don’t have full shows yet, and allow them to benefit from being part of the longest running comedy festival in Europe.

So, we asked for support from our audience and comedy fans across the UK for Circuit Breakers.

And after 6 weeks of crowdfunding campaign, we raised more than £1500 to set up the first project.