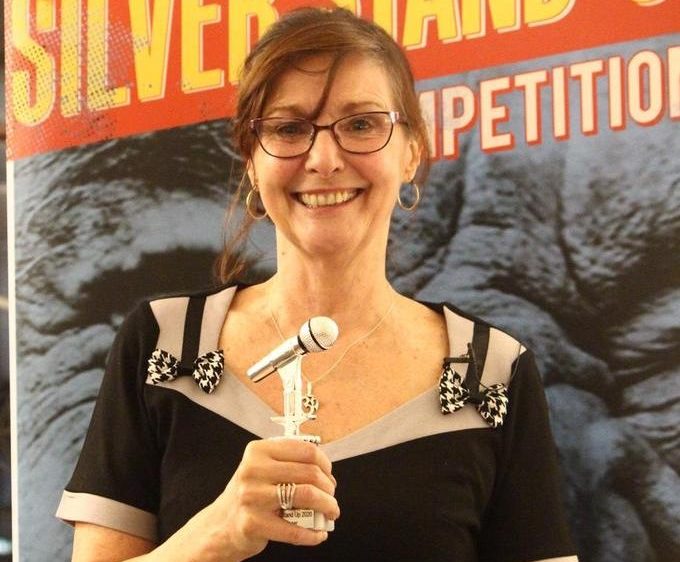 Silver Stand-up is coming back at PETER Pizzeria on Thursday 17th February 2022!

Get your tickets to the final hosted by Mrs Barbara Nice now!

The participants to the heats this year are:

Leicester Comedy Festival is renowned for nurturing new voices in comedy, and offering audiences the opportunity to be among the first to spot the stars of tomorrow. As well as the Silver Stand Up competition, the prestigious Leicester Mercury Comedian of the Year award has launched many of today’s comedy heroes, with Johnny Vegas, Miles Jupp and Rhod Gilbert all previous winners.

The first Silver Stand Up competition was won by Shelley Bridgman who continues to gig regularly across the UK and was a founder member of the Trans Comedy Award, working with BBC writers to develop scripts that portray funny and positive representations of the trans community. The winning script, Boy Meets Girl, aired on BBC Two in 2015, to critical acclaim.

The 2013 winner of the Silver Stand Up competition, Marc Lucero, regularly gigs across London, and the 2014 competition was won by Peter Callaghan, a member of the comedy collective Old Folks Telling Jokes, which performs around the country.

In 2015 the competition was won by Ed de Cantor.  Ed had given up performing stand up aged 40, thinking he was “too old”.  On winning the competition in 2015, he said “I am completely over the moon. Winning this competition is a dream come true.”

The 2016 winner was Marguerite Grant, a Missouri native now based in Cambridgeshire, who performed in-character as a housewife and inventor.

In 2019 Nipper Thomas from Birmingham was crowned Silver Stand Up of the Year 2019.

to The Big Difference Company Charity